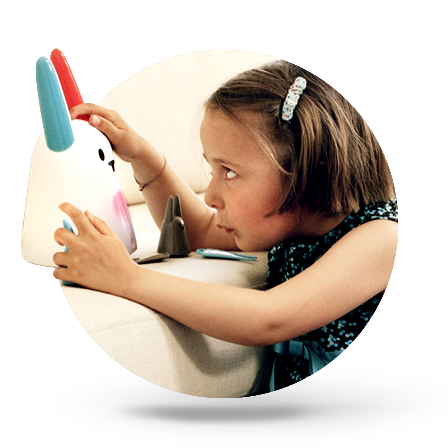 Christophe Rebours, co-founder of Violet, has been designing communicating objects since 2003. With the DAL lamp (Digital Ambient Light), he had started the process of designing emotional messengers, carriers of non-intrusive messages by subtle sequences of soft lighting. He then designed the Nabaztag rabbit – developed and published by Violet. When Mindscape acquired Violet, Christophe Rebours and InProcess remained the custodians of the saga of the rabbit, its DNA and its original design. Mindscape entrusted InProcess to design Karotz and the new experiences the rabbit could provide the public.

From Nabaztag to Karotz, the saga of the rabbit goes on!
InProcess chose to enhance what made the success of the first generations of Nabaztag: its sleek design, its simple ‘signs’, its swivel ears, its soft lighting effects. We focused on the design of new usages and on the definition of personality specifications, which Mindscape could seize and adapt to develop the new Karotz. We built scenarios (stories about ideal experiences) of innovative experiences with rabbits. We scripted multiple situations and the relevant behavior of the rabbit to create links between family members and their tribes.

Karotz is born in 2011.
Mindscape developed it based on InProcess’ recommendations of practices, personality, new components (including a webcam and the battery).
We wish it a long life in the hands of its new family, Aldebaran Robotics!