InProcess proudly announces the design of a new Nabaztag, rechristened Karotz, for Mindscape InProcess design teams are proud to give Mindscape its new baby rabbit!

EInProcess designers remained faithful to their original plans to design a new version of their famous communicating rabbit and its swivel ears. Karotz gives life to a new generation of the messenger of emotion and information.

Karotz is a smart and sweet communication channel to keep in touch daily with the community of our loved ones. It is permanently connected to the Internet and it transforms the traditional new technologies communication by adding emotion, warmth and sensitivity… a true personality.

Innovation through design at the Adetem

Pascal Pompei will speak at the Innovation Club of the ADETEM (national association of the marketing executives) on “How to innovate through design?“. He will more specifically address the conditions of success for the emergence of new practices and behaviors. Organised by the APCI, the “Observeur du Design” highlights and rewards every year a selection of the best designs created by companies and designers. This year, InProcess is very proud to win the “Label de l’Observeur du Design 2011″ with the retail piece of furniture it designed for La Poste and its parners.

POM, the first charger fit to be seen

For UNIROSS, InProcess imagined a charger able to install the gesture of recharging in the daily life of the users. POM is the new product belonging to the category of the small equipments of domestic energy; it facilitates the recharging of batteries but also nomad devices, thanks to the integrated USB port, and becomes a object which is fit to be seen and which takes a particular place at home or at the office. POM has already obtained an “Etoile de Observeur du Design 09“, has been selected for the International Biennial of Saint Etienne, won the SuperDesign 2010 Prize and was awarded with the “Special favourite sustainable development” SuperDesign Prize.

Korea Times: Designing from & for the human experience

As the world is ascending into a future of automation and sleek lines, Ines Min from The Korea Times interviews InProcess’ CEO, Christophe Rebours, on his vision about the ever-increasing need of human centered innovation. He also contributes thoughts on the Korean and French complementary approaches when it comes to understanding contemporary lives, from ubiquity to human sciences history.

The Karotz Designer Diary #3 is live! In the third episode of the Karotz’s Designer Diary, Christophe Rebours explores the design of the behavior of the rabbit.

Related to physical attributes (see Episode #2), it is as much determined by the technical ingredients of expression as by the tone of the rabbit. The Karotz’s webcam has for instance allowed InProcess’s designers to script multiple life experiences, transmitted to Mindscape as a specification book. The tone of the rabbit, induced by its voice and its vocabulary has been in the same way copiously scripted. These are the key ingredients of an experience design.

Christophe Rebours is invited to give a keynote conference on innovation and on InProcess’ original methods to give birth to inspired design, during the Rendez-vous@Seoul event at the Kring.

He is also invited to meet with Korean outward-looking and innovative companies, who are highly receptive to the creativity “à la française” in the design field.
While Korean design talents are renowned worldwide, the intercultural exchange in the design business gets highly attractive. Collaborative projects between cultures can set new industrial standards and processes, inspire new business models, and encourage new ways for people to connect with one another. 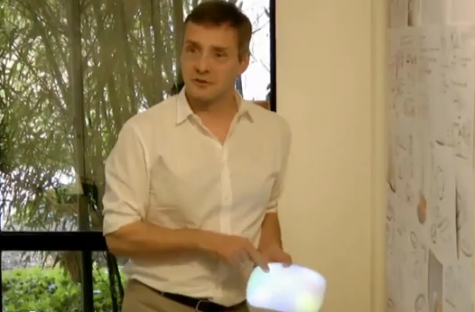 In this second episod of the saga of the rabbit, Christophe Rebours presents the thinking and research on the light that gave birth to the DAL lamp.

He details the expressive power of the light, its rhythm and color variations which make it a powerful vehicle for expression. He then presents Nabaztag, Nabaztag: tag and Karotz. Poetry of the colored light is one of three key physical attributes of the expressiveness of the rabbit, the second is surely the efficient movement of its ears and the third is the sound – Christophe will discuss that soon!

The Karotz Designer Diary #1 is out! “Design is one of the essential elements of the rabbit’s success” claims Christophe Rebours.

The designer of all the rabbits and the co-founder of Violet, tells the incredible saga of the rabbit, from the Nabaztag birth to its maturity in Karotz, through “Designer Diaries.”

In this chapter #1, Christophe Rebours explains how this first emotional messenger, now worship, was born. Before our eyes he draws rabbits just like he did when working on the first designs, he shares his inspiration, demonstrates the importance of design to stimulate the emotions, and explains why he campaigned as a designer to create and give a strong identity to this object so that it can seduce users and get installed permanently in our lives and homes.

DesignFax: InProcess, the agency of a world in mutation

Design fax portrays InProcess.
In this article, Design fax interviews Christophe Rebours about our methods and their application in a world in mutation. Christophe details the paradox of a strong need of models reinvention, with big innovation projects, and the fact that in the same time projects are run in chaotic context, with tight budgets.